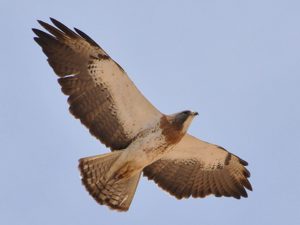 Designscapes Colorado has the pleasure of having two Swainson Hawks take residency on our property after their record breaking yearly migration.

Every year these raptors migrate in large flocks, called kettles, which contain thousands of birds traveling approximately 17,000 miles roundtrip in the spring and fall from their breeding grounds in North America to their wintering grounds in Argentina’s pampas.  Making their way through Chile, island countries of the Dominican Republic, Trinidad, Tobago and Norway deem them as being “quite the traveler.”

The Swainson Hawk (Buteo swainsoni) is a large Buteo hawk named after British naturalist William Swainson.  This species or its immediate predecessor is the ancestor of the Galapagos hawk.  The latter diverged from the mainline birds perhaps 300,000 years ago, which is a very short evolutionary timeframe. 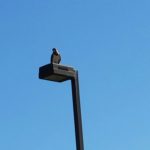 They breed in prairies and grassland in western North America.  They tend to build stick nest in trees, shrubs and cliff edges.  Our little visitors built a nest on the lighting pole in our parking lot; hopefully to reproduce and protect their young.

The diet of the Swainson hawks is unlike most raptors.  While breeding and raising their young they feed on small mammals but during migration and winter they eat insect such as grasshoppers, moths, butterflies and mostly leaf beetles.  This makes them of special importance to farmers in both North and South American.  They can live entirely on insects and rodents helping to eliminate crop destruction.

The Swainson hawk has been placed on the list of Federal Species of Concern.  The primary reason is due to the massive destruction of over 20,000 hawks attributed to pesticides used in Argentina’s agricultural area as well as their loss of habitat. 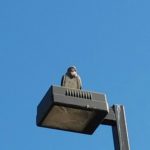 We have formally named them Mr.  & Mrs.  Swany.  If you happen to see the Swanys in the parking lot, PLEASE STAY CLEAR!  We want them to be able to reproduce and thrive with as little interference as possible from human contact.  PLEASE DO NOT DISTURB AND ADMIRE FROM A DISTANCE.

Welcome the Swanys to Designscapes!