Close encounter of the most destructive kinds. 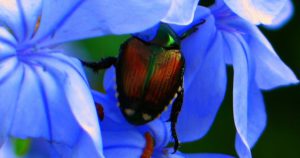 The Japanese Beetle was first found in the United Stated in 1916 near Riverton, New Jersey.  They are known to be one of the most highly destructive mutilator of turf grass and landscape planting in the eastern US but recently have spread their havoc over the Front Range of Colorado.

Japanese Beetles lay eggs that hatch in the soil in mid spring which turn into larvae or grubs.  They have a creamy white body (normally curbed in a “C” shape), dark head and thorax legs.   These larvae eat roots in high moistened areas which can gravely damage and prevent the flourishing of plants and lawns. 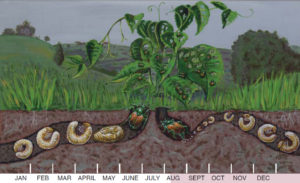 The larvae pupate in warm spring and the adults begin to emerge in June and July.  The afflictions produced by the adult versus the larvae dramatically differ.  Just to mention a few of their preferred diet snacks; adult beetles feed on leaves, lindens, roses, crab apples, Virginia creeper, grapes, beans and fruit with high sugar content but any plant is at risk.  They leave irregular holes in the spaces between the leaf veins and literally destroy the plants existence.  Plants that resist the beetles generally are conifers, lilacs, ash tree and Euonymus species.

The adults have an active period of 4 to 6 weeks beginning in late June and will begin to die off 30 to 45 days after.  They feed, in groups, on about 300 species of plants, starting at the top of the plant eating its way downward leaving a lacelike or skeletonized appearance with odor emitted leaves which tend to herd more beetles. They can infest areas several miles away but tend to move in short distances to feed or lay eggs. 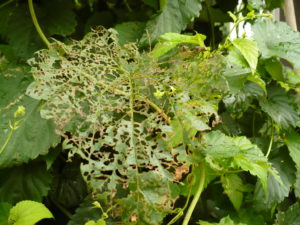 The first step in controlling their population is awareness and having the ability to identify these insects. The adults are oval shaped, about 7/16 inches in length, generally metallic green with coppery brown wing covers which do not completely cover their abdomen.  Along their sides are five patches of whitish hair and their antenna’s are clubbed at the end and can spread to a fan like form.  The best form of protection is to control them at the grub or larvae stage which will require timed applications of a soil insecticide to infested turf.  Another method would be to leave your lawn a little thirsty by reducing your watering schedule which will deter them to seek elsewhere soggier to lay their eggs.  Plant selection is also key in preventing their deadly spread.

Please be aware that smashing these beetles will cause a rapture that releases pheromones that will only entice others to move in.

If we can provide further assistance please contact the Designscapes Team at info@designscapes.com