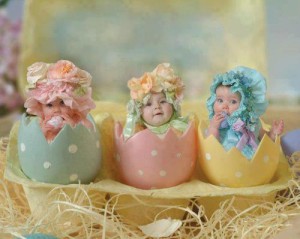 March is the month for Easter and all of its oodles of festivities.  There is nothing more traditional to the Easter holiday then egg decorating and hunts, gift baskets, chocolate bunnies, parades and Easter Lilies.  But do you know how it came to be that we signify this alluring flower with Easter?  What are their origins?  How do we preserve the life of this natural gift of artistry?

The Easter lily (Lilium longiflorum) originated from the Ryukyu Islands in southern Japan.  They made their journey to America in 1919 via Louis Houghton, a World War I soldier that brought a suitcase full of hybrid lily bulbs to the south coast of Oregon and distributed them freely to his neighbors, friends and family.  During World War II the Japanese source of lily bulbs had tremendously depleted and as a result their overall value exceedingly soared which allowed many of them being grown by hobbyist to launch an uncharted business venture. It was nick named “White Gold” and produced a prosperous livelihood for many by 1945. The coastal region straddling Oregon and the California border was titled the “Easter Lily Capital of the World” due to the consolidation of growers. 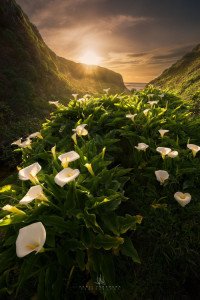 Easter is associated with a historical belief system dating back to B.C.E. (Before Common Era.)  Throughout the centuries it has become a symbol of grace, purity and regal lifestyle.  Not only is it one of the utmost appealing flowers known to man but ultimately it also represents motherhood and spirituality. A thirteenth century scholar from Paris named Bartholomeus Anglicus was quoted saying, “The lilt is a herbe with a white flower; and though the leaves of the floure be white, yet within shineth the likeness of gold”.  So as the saying goes, “To gilt a lily is to attempt, foolishly, to improve on perfection”.  Many artist and poets proclaim that if a flower could have a soul, the lily would most definitely be amongst the breed. The Easter lily remains a beautiful representation on how this holiday is a time for celebration and rejoicing.

If you have recently purchased or been gifted an Easter lily here are some directions on how to accurately care for and preserve its life.

If trying to maintain indoors, attempt to reduce its outdoors growing requirements. Lilies like bright indirect light so place near a sunny window that has sheer, blinds or other protective shading that prevent direct light which can cause sunburns. Keep away from heated appliances and ducts.

Water the flower every day and use a 20-20-20 formulation of liquid fertilizer every three months to provide the proper balance it will need to thrive.  Ensure the pot has a good drainage system because the water and liquid fertilizer will need to flow freely to prevent soggy soil and buildup of salts in growing medium.

Do not throw away your lilies after they are done blooming. Save the bulbs and plant them outdoors as soon as the ground is favorable enough to begin planting.

Once the ground has thawed, the rain water has dissipated and the frost has diminished it is time to begin planting.  Plant your bulbs 6 to 8 inches deep in the soil and choose a location that receives plenty of sunlight and can drain properly.

Water freely if rainfall is less than 1 inch per week and provide an inch or two of mulch around the plantings in order to keep the roots cool.

Lilies are especially poisonous to cats so make sure to keep them far away from your beloved feline.

The Designscapes Colorado Team wished you a festive and Happy Easter!