A Busy Winter for Rodents 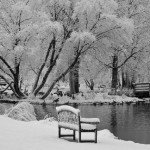 your yard.  Snow hides hungry rodents such as voles, mice and even rabbits who spend the winter chewing away the bark from shrubs and even trees and tunneling through the lawn.

All this undercover activity can cause serious damage to the appearance and health of your landscape.

Voles, in particular, are prevalent throughout Colorado and a serious nuisance in landscaped areas.  They also tend to be more prevalent during years of heavy snowfall such as what the Front Range has experienced this season. 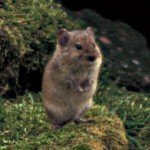 Voles are tiny rodents usually between 4 and 8 inches long and weighing 3 ounces or less.  Even though they do not hibernate and are active both day and night, we see more of the results of their busy efforts than we see of them.

What they do
Voles burrow below the snow to create surface runways in lawns that look like tiny trenches and they also burrow underground. In addition, they cause extensive damage to ornamental plants by girdling branches on shrubs or the trunks of young trees.

Girdling is what happens when the bark of the entire circumference of a branch or tree trunk is gnawed away.  Underground, their chewing often girdles the roots of trees and shrubs. The result will be dead branches and even dead shrubs and trees when the girdling is extensive.

When we see the damage
All the gnawing below ground and under cover of snow is usually not apparent until early summer when we will see dead branches or entire dead shrubs.  When tammy junipers come out of winter looking more dead than alive, that’s generally a sure sign of vole attack.  If given a choice of plants, tammies are a top menu choice for the voracious vole. 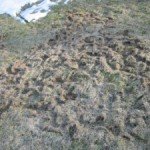 What can you do?
As with most problems, the extent of the damage and what you are willing to endure will determine the outcome.  According to the Colorado State Extension Service, deterrents and repellents may be marginally effective because they provide only short-term protection and require repeat applications.

Castor Oil is labeled for voles and also labeled as safe around pets and children, but its real effectiveness is not yet known.  Products that eradicate these rodents must be selected carefully in order to avoid harm to birds and other wildlife or a threat to pets and children.

You can also hope that the predators who feed on voles are nearby.  Owls, hawks and foxes, for example, would enjoy knowing there are voles in the neighborhood.

This entry was posted in